An international study shared on the National Institute of Health website found that 5G technology is absorbed by skin cells and can alter DNA in a way that actually produces coronaviruses within the human body. 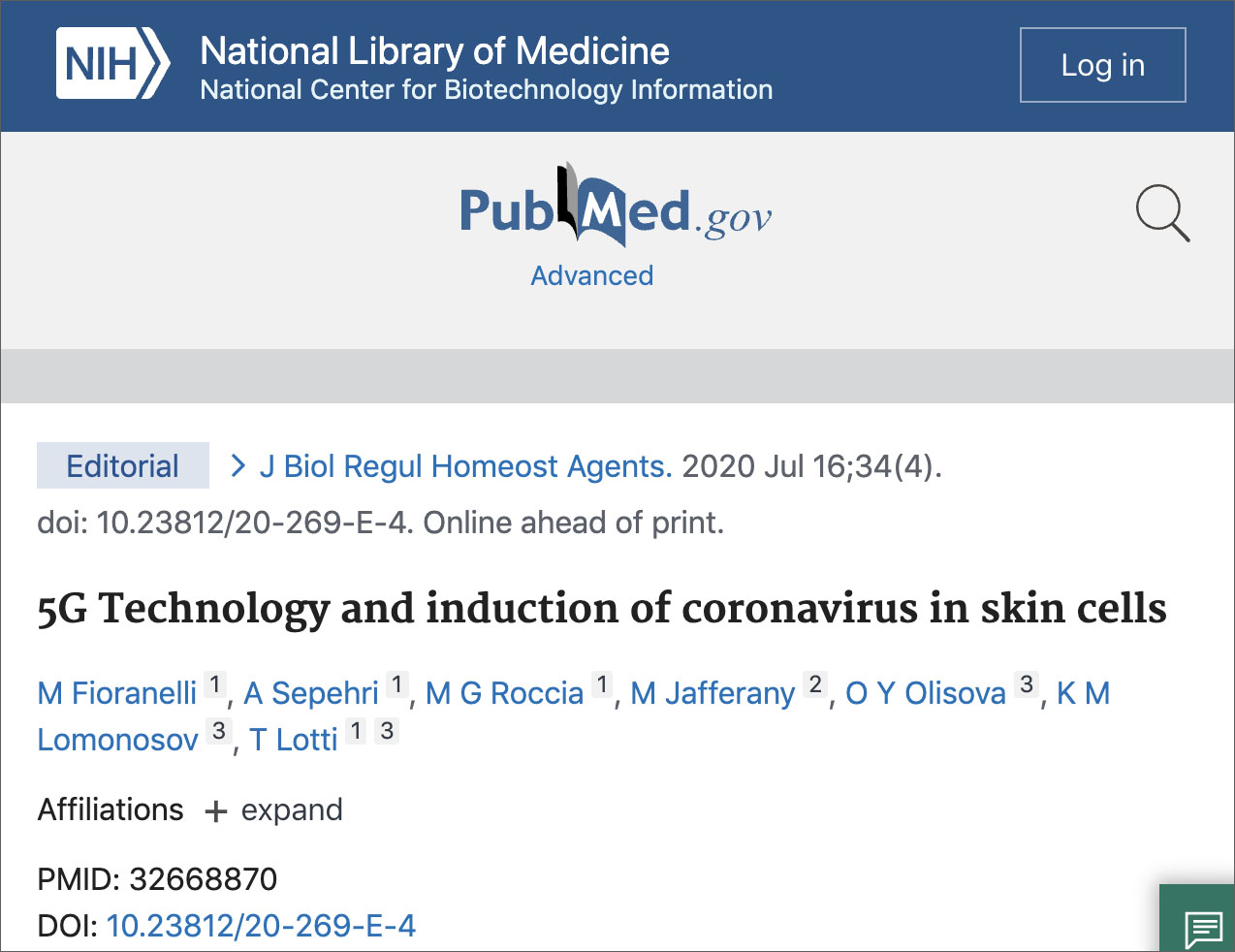 “In this research, we show that 5G millimeter waves could be absorbed by dermatologic cells acting like antennas, transferred to other cells and play the main role in producing Coronaviruses in biological cells,” the study states.

David Knight breaks down the groundbreaking new NIH report that sheds more light on what the 5G/Coronavirus connection might be.

“DNA is built from charged electrons and atoms and has an inductor-like structure. This structure could be divided into linear, toroid and round inductors. Inductors interact with external electromagnetic waves, move and produce some extra waves within the cells. The shapes of these waves are similar to shapes of hexagonal and pentagonal bases of their DNA source. These waves produce some holes in liquids within the nucleus. To fill these holes, some extra hexagonal and pentagonal bases are produced. These bases could join to each other and form virus-like structures such as Coronavirus.”

“To produce these viruses within a cell, it is necessary that the wavelength of external waves be shorter than the size of the cell. Thus 5G millimeter waves could be good candidates for applying in constructing virus-like structures such as Coronaviruses (COVID-19) within cells.”

The study goes on to suggest that the cancer-causing qualities of 5G are due to how it alters DNA within the body.

“In another study, it was argued that 5G technologies cause great harm to human health. Cancer is only one of the many problems. 5G causes 720 (factorial) different diseases in human beings, and can kill everything that lives except some forms of microorganisms (12). To consider the effects of 5G millimeter waves on biological systems, we propose a model which describes the process of exchanging waves between 5G towers and host cells.”

As Infowars reported over 6 months ago, Wuhan, the global epicenter of the coronavirus pandemic, rolled out 5G systems just weeks before the COVID-19 outbreak hit, with some scientists claiming that 5G’s effects on human cells can cause “flu-like symptoms.”

Concerns about 5G’s role with coronavirus were even raised by Hollywood stars like Woody Harrelson, who shared a study in April suggesting a “causal” relationship between 5G systems and the coronavirus.

Read the full study below:

Sure 5G means more devices at mega-fast speeds, low delays and your personal files will instantly pop out of the cloud. But the 5G rollout is rife with so many issues threatening human health and civil liberties that it’s simply easier for the mainstream media to sell you a stack of positives rather than address the mountain of negatives.

COULD 5G BE TRIGGERING THE SPREAD OF THE CORONAVIRUS?

In his landmark book on electricity and life, “The Invisible Rainbow,” Arthur Firstenberg, traces an eerie connection between the advent of four new technologies and major influenza epidemics in 1889, 1918, 1958 and 1968.

The most notable connection is the famous Spanish Flu Epidemic of 1918, which killed more than 20 million people worldwide. This epidemic actually started on military bases in the US at about the same time the US military was rolling out a new form of wireless communications. Between 1917 and 1918, the US military built the world’s largest radio network. Meanwhile, the flu accelerated across military bases both stateside and overseas, and on ships equipped with the powerful wireless transmitters. As the troops and wireless equipment arrived in the European theatre during WWI, a sudden explosion of disease raced unabetted across Europe.

As this influenza seemed to move too fast for historic disease models, dozens of scientists began to question the idea of a contagious virus. Testing was inconclusive as to whether the Spanish flu virus (H1N1) was actually being spread by germs, or something else. Firstenberg and others put forth the theory that wireless and other electrical fields may change the electrical nature of the earth’s atmosphere. The electrical core of the earth generates the earth’s electromagnetic field, which sends electromagnetic waves outward to the ionosphere, where they bounce back to earth and circumnavigate the globe. In its natural state, the earth emanates a 500 milligauss magnetic field at about 7.83 cycles per second. Yet, dramatic electrical changes to the earth’s atmosphere could disrupt the evolutionary balance of the electrical nature of the planet.

Could such an electrical shock to earth’s natural electrical field trigger dormant viruses in people and animals? After all, we are all electrical creatures. When we are healthy, 50 trillion cells in our bodies operate at around 70 millivolts. Could the new US military wireless signals, which had suddenly sprung up across the globe, have activated unnatural electrical activity in the already highly, electrically-charged ionosphere? And what effects could this have on our own body chemistry, which depends on a delicate electrical balance?

Firstenberg also connects the flu epidemic of 1889 with a new electrical innovation. This time it was the rapid expansion of the electrified railroad in the US. Until 1888, there were only 45 miles of electrified railroad in the US. Yet, in a single year, this network grew to over 1000 miles. These very low frequency waves can travel thousands of miles, bouncing off the ionosphere and virtually traveling around the world at the speed of light. That same year a vicious flu erupted virtually simultaneously in such far-flung places as Greenland, Uzbekistan and Northern Alberta. It then quickly appeared in even more disparate locations, such as Philadelphia, Australia and the Balkans. In the days of pre-air travel, it seemed impossible that a contagious disease could travel this fast to so many seemingly-unrelated geographies.

By the end of 1889, the death toll had reached over one million worldwide.  Even more telling is that until then, influenza outbreaks had been a relatively rare occurrence. It had been nearly 30 years since the previous influenza outbreak in England. Firstenberg suggests that 1889 marked the beginning of influenza being an annual phenomenon for humans.

Missile Defense Systems and the Asian Flu of 1958

We now flash forward to 1958. In the heart of the Cold War, the US had just completed the build-out of the most powerful and extensive missile defense system the world had ever seen. Hundreds of high power radar stations which generated 1350 megahertz signals and included Doppler stations, operating at more than one kilowatt, were suddenly filling the heavens with unnatural levels of microwave radiation. The problem is that all these microwave signals bounce off the ionosphere and then come back to earth. The earth’s electrical envelope acts like a resonating chamber that traps all this electrical activity and propels it at light speed to all corners of the planet.

During the build-out the US triple-threat missile defense system, the Asian Flu was born in China. The death toll ultimately reached 4 million worldwide. Scientists associated this flu with the H2N2 virus, which was thought to be avian-related.

So, which is it? Is the flu caused by long dormant viruses, which are suddenly triggered by electrical disruptions in the atmosphere? Or, as it is generally believed, is the flu transmitted by viruses mainly found in birds, or poultry that somehow find their way into the human population?

Actually, both theories may be correct.

In 2013, a Washington State University professor, Dr. Martin Pall published a landmark paper, “Electromagnetic fields act via activation of voltage-gated calcium channels to produce beneficial or adverse effects.” This paper shows how electrical changes to ion channels can lead to biological chaos in the body, including the proliferation of free-radicals and excess calcium ions. Excess calcium ions (electrically charged elements) can be toxic. Typical symptoms include nausea, fatigue, muscle pain and fuzzy thinking. Sound a little like the flu? Meanwhile the proliferation of free-radicals creates inflammation, neurological impacts, and a compromised immune system.

If both Pall and Firstenberg are right, the rapid spread of the flu is much more than just the exposure to the underlying virus. While the virus is real, it may be both triggered and accelerated by changes in the electrical environment.  Such changes undermine our immune response to these viruses and we are unable to fight them off.

This brings us to 5G. For those who are unfamiliar with 5G, it is the fifth generation of wireless and cellular technologies. It uniquely uses intense clusters of wireless transmitters, which produce extremely high frequency signals and raise radiation exposures to humans exponentially. The frequency levels of this new technology can be many, many times higher than current wireless standards. Noted physicist Maxwell Planck showed that the level of energy in an electrical source is proportional to its frequency. Thus, 5G stands to impose significantly higher biological effects on humans than any previous technology.

Now, is it any coincidence that Wuhan, China, a leading “Smart City”, and one of the earliest adopters of 5G transmitters, is the very source of Covid-19 – the Coronavirus?

Well, if you are still doubting the connection between 5G and the Coronavirus, check out this overlay map* which locates major 5G installations in China and the major outbreaks of the Corona virus there.

Maybe Firstenberg’s claim of a connection between influenza and wireless technology is not so far-fetched after all.

The red and blue circles below represent 5G installations in China and North Korea. The light pink shows the regions marking the spread of Coronavirus. The map was created by an independent researcher overlaying a map of the 5G rollout in China with a map of the Covid-19 outbreak, both downloaded as of 2/26/20. Understand, this is a crude gauge using what information was publicly available on that date, and it is presented here only as a means to suggest that further serious research correlating Covid-19 incidence with locations of the 5G infrastructure should be undertaken.  If greater incidence of the Coronavirus is occurring in locations where 5G technologies have been deployed, this will be of critical public health importance. 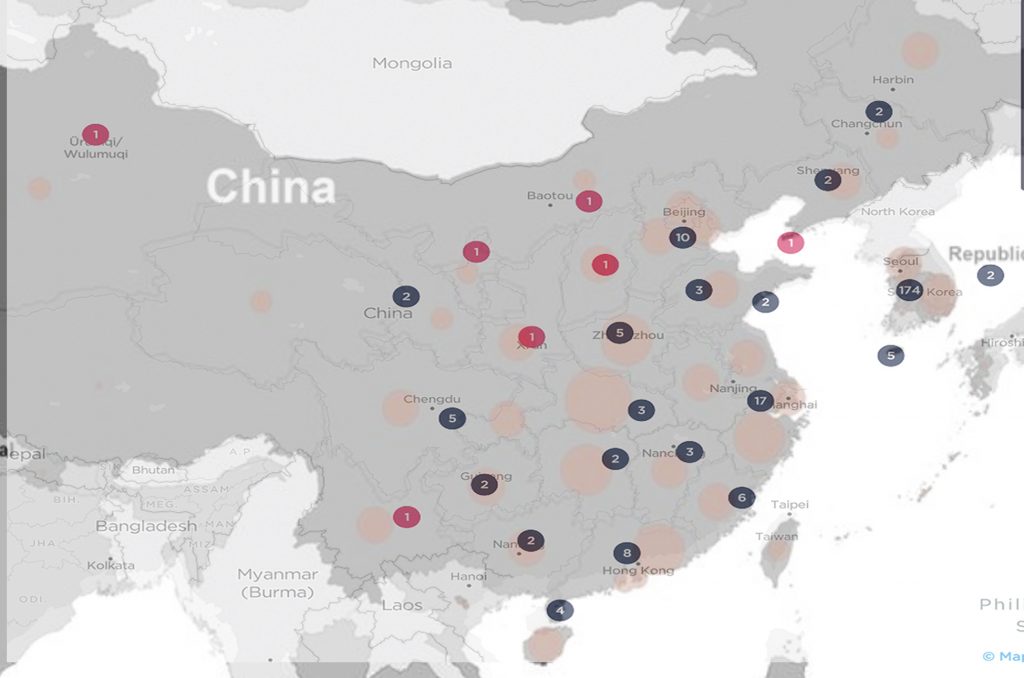 See recent write up on 5G risks, including mention of the Covid-19 by Dr. Martin Pall here.